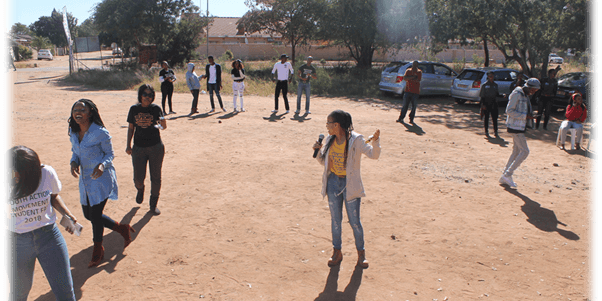 BOFWA partnered with Young tutors  Botswana (YTB) and conducted a demand creation activity which took place on the 21st July  2018.

This initiative was implemented to create demand and bring awareness to the targeted population on both SRHR and academic empowerment initiatives available within their communities. Young people were brought on board to discuss their academic and health needs that addressed issues faced by young people as they transition from youth to adulthood. Young people face various challenges during this transition and the major ones being academic and economic growth and sexual reproductive health related issues. This will increase chances for young people to become employable due to their educational capacities and also lead a healthy lifestyle with an anticipated increase in life expectancy.

During this demand creation initiatives young people were given the liberty to explore BOFWA services and be brought into awareness to comprehensive sexuality education which when subsequently administered will increase knowledge levels among young people thus increasing access to health care services. Young people will become more aware of their sexual health needs and rights and also create a system of dissemination of information to other young people through leadership empowerment approach.

BOFWA as the host had an open day clinic at this event. Young people, Parents and Partners were able to receive knowledge on BOFWA services and also utilise the clinical services. The main components of BOFWA service provision was under the following 3 pillars

Comprehensive sexuality education is the key approach in increasing knowledge levels of SRHR among young people.

CSE also is used to increase access to services by young people as young people will be aware of their sexual needs.

more than 40% of the attendees to enrol into structured CSE sessions which are done on weekly basis for at least 40 minutes per session. BOFWA will ensure continuity of CSE structured sessions either through the static facility or weekly outreach to youth organizations or institutes.

Advocacy– BOFWA sold a leadership and governance programme in which it seeks young people aged 10-24 to join and be members of BOFWA’s Youth Action movement (YAM). This is a leadership programme that capacitates young people to became leaders and be in the forefront of sexual Reproductive Health. These will be trained as international youth ambassadors who will be able to represent youth health issues in youth forums both nationally and internationally. These young people are registered as members of BOFWA and they are given capacity and training on youth SRHR programmes. During the activity mobilization and sensitization was provided and allowance to new recruitment was also given.

• Implant education and booking for insertion