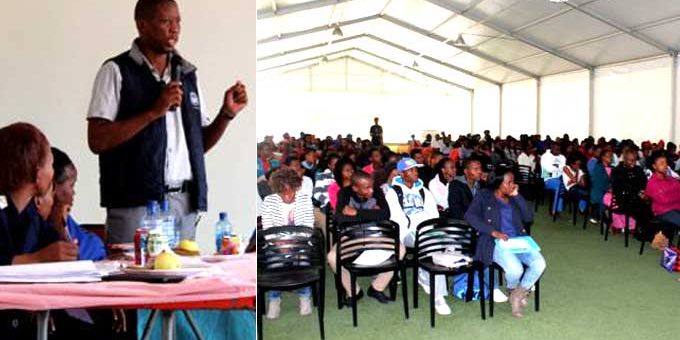 It is not every day that you hear people discussing issues of abortion unless it is in the streets, closed windows. Abortion is no discussion topic particularly in our communitiesbut it is evident that there have been cases of abortion among the communities at different districts around the country in the past and currently. The numbers of abortion cases and the statistics have risen over days. Young people being the most affected age group. In recent times we have also seen some parliamentarians being open to discuss the topic which is a great concern to the nation. The topic is no longer a secret but rather a matter which needs to be addressed by both the government and the people of this great nation.Through the support from the Hewllet Giz funds Botswana Family Welfare Association conducted community dialogues at 3 districts North west – Francistown, Kgatleng – Mochudi and Ngwaketsi – Lorolwana to educate and sensitize communities. The idea behind is to get people and communities to talk about abortion in a conservative way to develop solutions. The dialogues showed that communities need to be visited once in a while to bring issues of concern to them and let them discuss these to identify solutions. This is due to the fact that in every district there are many challenges and some of the district the cases which were recorded were very few and in others there were high numbers which are alarming.The following questions were used during the community dialogues as a guideline but were not limiting the moderator to;

In the next face of making the conservation around abortion to continue the next level is targeting policy makers and the leadership both councillors and parliamentarians with effort to get them tabling motion for discussion at parliament and council meeting. The thinking from community members is that a lot needs to be done, and involving our leaders it is the starting point. Maybe it is about time to review the current laws regarding abortion or rather we focus on educating the communities and these are the words coming out from community members.

Key Recommendations from the Dialogue: