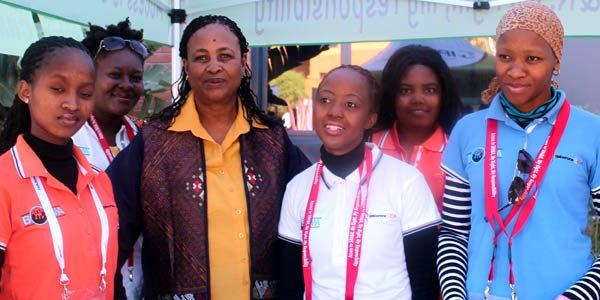 The 22nd to the 31st of May 2014 was the dawning of a new age for Botswana; a flame was ignited that is far from being put out at any moment. Botswana was given the distinct privilege to host the 2014 2nd Africa Youth games. The Nation housed 53 countries with over 2500 athletes participating in 23 sporting codes at the University of Botswana, BONA grounds, SSKB, BNYC centre, National Youth Centre, Botho University Hall, Gaborone Dam, National Stadium. The Botswana Family Welfare Association utilized this opportunity to increase its visibility using the leadership structure (YAM) Youth Action Movement members to mobilize and sensitize the athletes and the public audience under the theme; Access to SRH&R; My Right; My Responsibility.BOFWA’s team of Youth Action Movement members set out to disseminate information on the services offered at BOFWA branches as well as increase the visibility of the Association among youth people. This was done through education on sexual rights for young people, family planning commodities available, sharing the BOFWA programme and using promotional merchandise to attract young people. Youth Action Movement positioned themselves strategically by bringing in French speaking youth into the movement to target French speaking countries to access among those country to visit BOFWA stalls throughout the youth games.On the other hand the YAM team was tasked with recruiting new members into the movement which, YAM targeting young people aged 18 – 24 years.

The youth games provided an opportunity to get feedback from young people and adolescents that the association is serving. From the interactions it has been clear that our African culture and believes forms a great dimension in our perception to sexual reproductive health and rights as Africans.
(Continued on page 3)