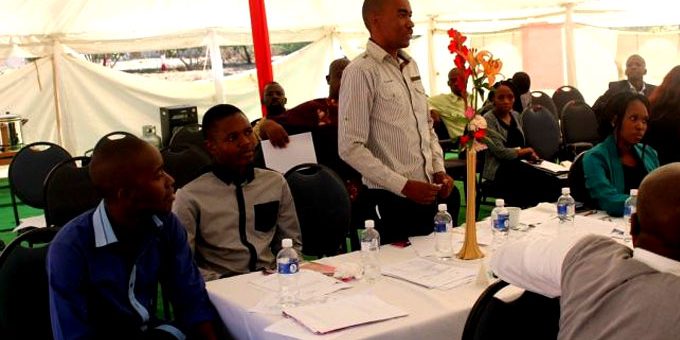 Sexual Reproductive health (SRH) is a human right, its fundamental. These are the words said by the BOFWA President, Professor Nthomang.

He said this, emphasizing that the country needs organizations like BOFWA which help people with Sexual Reproductive Health services, because there is a need for people to have a healthy reproductive life. Within his past term of office, he realized that leading a voluntary organization is not an easy task; you need to be very accountable and committed so that you can achieve the goals of the organisation. He asked if he is serving the organization.

He said he asked this because from his observation and through little research he made, many people knew nothing about BOFWA. He further asked the question to the council;”How are we making the organization visible?” He touched on the little participation of youth which he said is worrisome.

“Looking at the challenges faced by youth; to mention a few- the unemployment rate, SRH problems and the fact that sexual debut has decreased to 13 years. The question is, what is BOFWA doing to look on to these issues?” He said BOFWA has gone through ups and downs and the following were the achievements: BOFWA is a certified accredited organization, it is accredited by International Planned Parenthood Federation (IPPF) and it happens every five years. BOFWA is a member of Alexander Forbes, so this shows that the organization also recognizes the welfare of its staff.

The organization has expanded the service delivery; it has engaged Doctors who provide ARV and added the Service Delivery Officers. BOFWA has also expanded branches; they have added Francistown and made Maun a business hub Centre. It has also increased participation in community activities, for example Lerolwana outreach activities, Mahalapye- Mompati Merafhe Centre, BOFWA is going to provide SRH services and the organization is looking forward to other villages to upscale the services. There is also an increasing number of Partners e.g. Management Sciences for Health (MSH). He also touched on the challenges faced by the organization which were: spirit of volunteerism, he said BOFWA needs people who can sacrifice their lives for the lives of others, but it seems like people do not have the spirit of volunteerism.

In the proceedings of the day BOFWA held its elections which were coordinated by an independent electrode and a new committee was elected and the following candidates managed to get a seat on the National Executive Committee:

It is now clear that BOFWA needs a need focus, particularly with the review of the strategic plan for the Association which is ending, this was said by the incoming President Professor Nthomang. Let‟s all continue to work together to take this Association to new heights and for all those who lost seats, show support and commitment to those who won to show our responsibility towards the Association, new day has began.